The Weird and the Lovely. 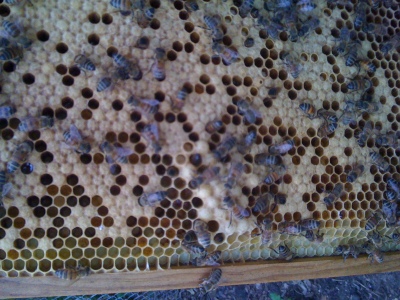 Bee babies, or brood. Notice the capped brood in the bottom center area, it is a bit more raised and dome like. This is the drone brood or the boy babies.

LaDonna inspection #2: July 3, 2010: I inspected LaDonna today and she is doing very well, I put a super on the hive body since all but two frames were drawn out and there was a lot of honey and tons of brood. Everything looked A-OK, although I still have not seen Queen LaDonna herself.

Delilah inspection #5: July 3, 2010: Short inspection as the blue sky started to pour rain unexpectedly. Lots of action. I need to do some research on the best time to split a hive because Queen Delilah is about to get too tall for me to reach if I add another box on top. Maybe if I just steal some honey in the next few weeks it will give her something more to do until I determine if I want another hive! I guess when the bees are good they are really good, but I can’t help feeling like next year I won’t be quite this lucky! I did do a little damage because I didn’t like the way they were building some of the comb. Basically instead of being flush against the frame they were building strips perpendicular to the frames that were attached to the adjoining frame. This meant that every time I tried to remove a frame I had to destroy the work that they had done. So until it really started raining, I went out and crushed all the weird comb so that, hopefully, they would build it right the next time.

Pollen storage, all colors. Notice that lovely cluster of bees, I wonder what they are meeting about.

I also helped Lili do an inspection of Queen Latisha. We  failed to spot the queen, no surprise, but her hive is just beautiful. Lili’s hive, Latisha, is not quite as active as LaDonna, even though we started them at the same time. I took a few pictures of the pollen storage. My bees seem less interested in pollen and more interested in honey, but Latisha had tons of beautiful pollen that was all different colors. The top cells that are white is capped honey. 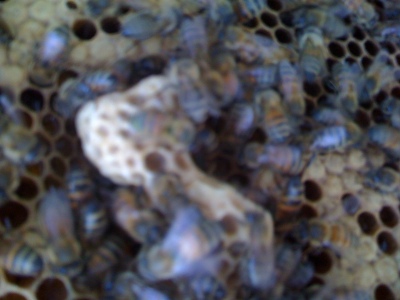 Weird structure build in Latisha's hive. No idea what it is, but it looked harder than wax and the holes are too small for the bees.

Latisha also had some weird things going on as shown in the photo below. What is that? I know it is blurry, but the holes in the comb here are too small for bees so it just looks weird. I have never seen anything like that, it was amongst other brood cells and at first I thought it was some kind of queen cell, but I have researched what those look like and it is nothing like that mess.

20 something in New Orleans, interested in urban farming, bees, and food.
View all posts by bonbeelog →
This entry was posted in Uncategorized. Bookmark the permalink.

2 Responses to The Weird and the Lovely.